When I go visit my elderly mom in California, I sometimes try and get a flight into San Francisco on a Thursday, so I can head up to the SFMOMA and take advantage of their late hours that evening. Last November,  I had been looking forward to seeing the Francesca Woodman exhibit. And I was not disappointed.

Feeling a bit voyeuristic, knowing how her story ends, and realizing the brief intensity of  Woodman’s creative life as a photographer. (died at 22- 1981) 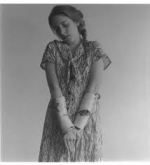 You almost find yourself looking at each intimate image wondering if any clues are being revealed through the work itself. As if each image was a small step in leaving.

Some of  my favorites show Woodman sitting with her hands beautifully posed, or small patches of light falling on a portion of her body. Many of the images were printed quite small, so of course we are drawn into her world.

Some of the series are haunting, (blurred passages of movement through decaying rooms) some a bit troubling, (what looks like blood smeared on her body) and some more lyrical and playful (her polka dot dress inspires a series)

One of the final ones in this exhibition design shows her posing with a copy of her birth certificate, which was particularly poignant.  It links her to other people who experienced her appearance in their lives and then her loss.  Almost as if to say, “I was here too.”

Unlike the Woodman show, this group of paintings spanned several decades- from the accomplished student using thick slabs of richly pigmented oil, (see Berkeley/Elmer Bischoff)  to the woman who was documenting her emotional/spiritual journey on canvas. 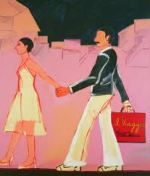 Loved the humor, and the domestic mix of animals, kids, favorite dresses, the swimming scenes, partners…the unflinching directness of her self portraits, the bouncy color. Yet, you didn’t get the same sense of self-revelation, these were more a series of snapshots of an artist’s life and relationships and interests. But without the emotional context.

Two women artists -both of whom left before realizing their full potential perhaps. Both who utilized their bodies in their work. One as a vehicle, to reveal an internal emotional life — and one as a subject, creating a screen through which her life stages were viewed.

I love the challenge of creating contradictory impulses - approaching and withdrawing -overlapping and pulling apart - density and ethereality - beauty and menace. All images are copyright the artist. No reproduction or use without permission.