Gradually, since I primarily write these entries for my self anyway, I hope to get down some thoughts about the last two months, and also the years coming up.
Nothing like helping a 90-year old person through some serious hurdles to get you envisioning yourself in the next decade or so.
Let’s just say I am relieved to be back in the studio again, getting reacquainted with what I left on the wall. It used to worry me if I spent time away from work that was moving along, but now I rather value the perspective of distance I get, and how it makes me see things more objectively – hence the two formerly thought-to-be-completed paintings I took back in and am now re-working a bit. It usually comes down to a balance between what is and is not visible, the relative scale of elements….
going to be around for First Friday as an experiment. The building where my studio is located also houses a small arts center which is referred to as a museum. They now charge people 8 bucks to walk through, so I am imagining it puts quite a damper on casual traffic. I happen to believe it’s a wrong-headed move in a city as small as this, but I’m just a tenant…..

Posted on October 1, 2010 Posted in Studio BlogTagged getting back to painting, museum admission charges, my elderly mom 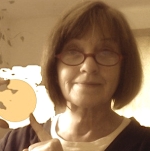 I love the challenge of creating contradictory impulses - approaching and withdrawing -overlapping and pulling apart - density and ethereality - beauty and menace. All images are copyright the artist. No reproduction or use without permission.
Join 283 other subscribers